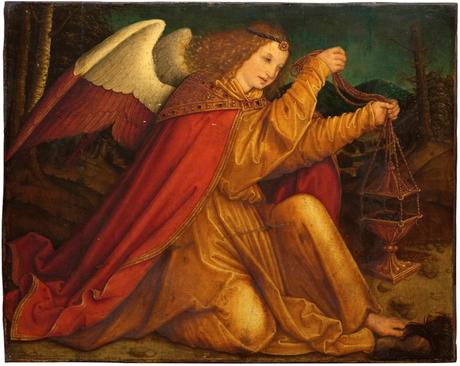 A rediscovered work by the German painter Bernhard Strigel (1460-1528), found last July in a house in Toulouse, will be auctioned on 4 February in the French city.

It is thought to be the lost pair of the Thurifer Angel by Strigel, which was bought by the Louvre Abu Dhabi for €1.1m at Drouot, Paris, in 2008. Born into a family of artists in Memmingen, near the Swiss border, Strigel’s name fell into obscurity until he was rediscovered by the art historian Wilhelm von Bode in the 19th century.

What is believed to be the long lost pair to the Thurifer Angel was found last July in a private home in Toulouse by Pauline Maringe, the co-founder of the young auction house Maison Artpaugée. “I was in the middle of an inventory. My client suddenly came up to me with this piece. It was so well preserved. I could not believe my eyes”, she says.

Maringe immediately took it to the Paris-based expert Eric Turquin—well-known for his own discoveries of Old Master paintings in France—who authenticated it. The Louvre Abu Dhabi was contacted at once, and it was disovered that the two oak panels, which depict similar-looking angels, are exactly the same dimensions (48.7cm by 61cm). The pair was broken up at a sale in 1813.

What is impossible to prove is Ernst Büchner’s theory, posited in 1944, that the panels were commissioned around 1521 as part of a carved and painted group for the church of Our Lady in Memmingen. Referred to as the Altarpiece of the Deposition, it was dismantled during the Reformation.

Strigel’s sense of detail stems from years working in the late Gothic style. But in this painting, the use of more contrasted colours, the imaginary background and the way the figure fills the composition, shows his evolution toward Renaissance painting. “This masterpiece is a lesson of art history in itself”, Maringe says.

According to the auction house, the panel, now called Angel in a Yellow Tunic, is in exceptionally good condition and is estimated at €600,000 to €800,000. Maison Artpaugée, which was only established four years ago, will hold the sale on 4 February in the 17th-century Chapel of the Carmelites in Toulouse, as well as online.