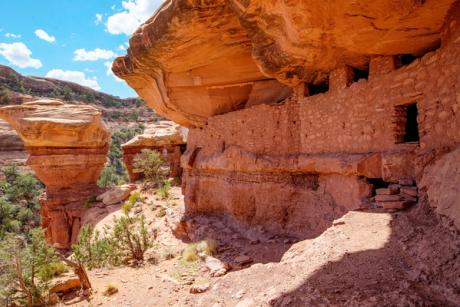 Five Indigenous tribes have entered a historic agreement with the US federal government to collaboratively manage the Bears Ears National Monument, the site in southeastern Utah that spans nearly two million acres and holds a rich concentration of ancient Indigenous artefacts, dwellings, petroglyphs and pictographs.

The Trump administration slashed the boundaries of the monument by 85% to open the site to uranium mining and other resource extraction in 2017—leading the World Monuments Fund to list it as an endangered site—a decision that was overturned by the administration of president Joseph R. Biden in October last year.

Republican legislators in Utah are currently attempting to overturn Biden’s mandate, claiming that its invocation of the Antiquities Act—a 1906 statute allowing presidents to designate federal lands as protected monuments for cultural, historic or scientific purposes—constitutes an “acrimonious legal challenge” that goes against the interests of state, local and tribal governments.

The region was granted protection in 2016 by then-president Barack Obama following decades of activism by environmentalists, archaeologists and Indigenous tribes who claim ancestral and present ties to the area. However, Obama’s pledge to give the tribes the right to co-manage the site was not formalised until now.

The five tribes involved in the decision include the Zuni Pueblo, the Hopi, the Navajo, the Ute and the Ute Mountain Ute. The purpose of the agreement is to ensure that the tribes have a voice in any decisions made by the Bureau of Land Management and the US Forest Service, such as resource protection, access and programme development.

“Instead of being removed from a landscape to make way for a public park, we are being invited back to our ancestral homelands to help repair them and plan for a resilient future,” Carleton Bowekaty, the lieutenant governor of the Zuni Pueblo, said in a statement released by the Bureau of Land Management. Comment | Art Basel is not just an art fair, it is a technology platform