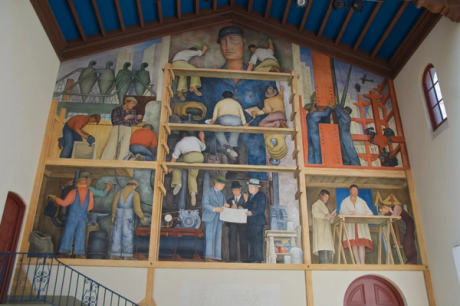 Two years after the San Francisco Art Institute (SFAI) first announced that it would consider suspending classes due to a lack of financial viability, the 151-year-old university has closed for good. According to a recently released statement, the SFAI will continue to exist as a nonprofit organisation in order “to protect its name, archives and legacy”, which includes stewarding a famed Diego Rivera mural on the campus.

Over the last two years, a number of possible outcomes were floated to avoid the SFAI’s closure. The first was the potential sale of its massive Rivera mural—valued at over $50m—but outcry from local artists and leaders was so vociferous that city officials unanimously voted to designate the mural a historic landmark, complicating any efforts towards its potential sale.

The SFAI, which commissioned Rivera to paint the mural for $2,500 in 1931, has since received a $200,000 grant to put towards conservation efforts targeted at the mural. Controversy over this proposed sale also caused the chair of the board to resign. It then appeared that the University of San Francisco was going to purchase the SFAI and fold it into their school, with both organisations going so far as to sign a letter of intent to do so, although USF leadership backed out of the deal last week.

According to The San Francisco Chronicle, the USF President Paul Fitzgerald said that the university had “informed SFAI leadership that it would not enter into a definitive agreement with SFAI due to business risks that could impact USF students, faculty, and staff”.

It is unclear what the future will be for the school’s Chestnut Street campus, which is owned by the University of California, Berkeley, and leased to the SFAI. And while the Rivera mural belongs to SFAI, not the University of California, a spokesperson for the art school said that they will forfeit ownership of the mural should they lose or default on their lease, and that they are actively working with donors in an attempt to stop this from happening.