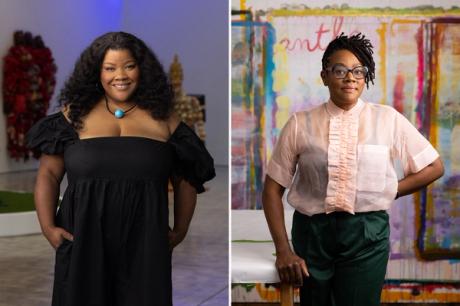 The American artists Cauleen Smith and Vanessa German are the recipients of the annual $250,000 Heinz Award, an unrestricted prize managed by the family of the late politician Henry John Heinz to recognise significant contributions to the artistic, environmental and economic sectors.

Smith, who was born in Riverside California, in 1967, is best-known for her experimental films, installations and multimedia works that reflect on historical concepts of race and power structures, such as her acclaimed work In the Wake that was featured in the 2017 Whitney Biennial and referenced representations of Black life across pop culture and artistic media.

She has shown similarly evocative pieces more recently at the 2022 Collective in Edinburgh and in the traveling exhibition Give it or Leave It, which premiered at the Institute of Contemporary Art at the University of Pennsylvania and concluded its run at the Los Angeles County Museum of Art in 2021. Her forthcoming work Musical Thinking will be shown at the Smithsonian American Art Museum next year and explore the resonances between video art and popular music.

German is best-known for her “power figures” and altars that confront racism and homophobia and visually evoke African religious sculpture, incorporating cowrie shells, mirrors and other symbolic objects. Her recent exhibition at Kasmin Gallery in New York, Sad Rapper (2022), included several remarkable altarpieces devoted to Black Americans who have been murdered by police officers.

German was born in Milwaukee, Wisconsin, in 1976, and is based in Pittsburgh, Pennsylvania, where she founded a studio and artist residency in 2011 in the marginalised neighbourhood of Homewood. Called Arthouse, the centre included studio spaces, an outdoor theater and a community garden; it was struck by fire in 2021 and is currently being rebuilt.

“One of the most noted experimental Black filmmakers of our time, Smith creates deep, imaginative experiences that shed sharp light on societal issues and conditions that are in urgent need of change, [while German] is honoured for her generosity as an artist and for her important, socially relevant work, in which she elevates art to its most powerful and original purpose: to foster greater strength and healing,” Teresa Heinz, the chairman of the Heinz Family Foundation, said in a statement.

The Heinz Award, which is now in its 27th edition, has granted more than $30m to 165 recipients since the programme was established in 1993. Some past recipients of its arts and humanities category include the artists Mark di Suvero, Dave Eggers, Sanford Biggers and Tanya Aguiñiga. Photojournalist Tom Stoddart, famous chronicler of the Siege of Sarajevo, is remembered by friends Klee Wyck, a historic home used by Emily Carr in West Vancouver, to be demolished