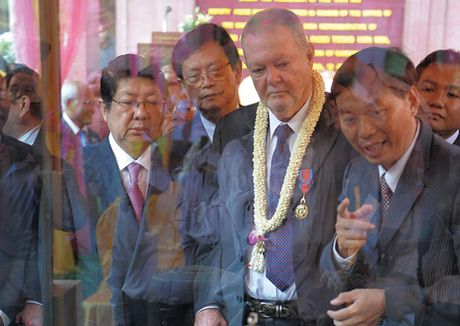 Museums around the world are coming under mounting pressure to return or explain the presence of potentially looted Cambodian relics in their collections, some of which may have been obtained by the late Douglas Latchford, the disgraced Bangkok-based art dealer and collector.

The Denver Art Museum intends to return to Cambodia four cultural relics originally acquired Latchford, while the Metropolitan Museum of Art in New York faces scrutiny from the Cambodian government in regard to dozens of Khmer Empire antiquities in its possession that officials believe were looted whilst the country was at war, citing newly discovered evidence.

Cambodian officials told The New York Times they have developed a spreadsheet of 45 “highly significant” items at the Met that, new evidence suggests, were stolen before being donated or sold to the museum.

Meanwhile, the media consortium working on the Pandora Papers, a cache of 11.8 million leaked offshore data files, reported that prosecutors identified at least 43 relics still held in ten museums around the world that passed through the hands of Latchford or his associates. The Pandora Papers also revealed that Latchford had close ties with offshore trusts.

“Practices have not changed since 2013. There is a long list of returns expected from museums,” says Eric Bourdonneau, the French scholar who identified a series of sculptures looted from a temple in the tenth-century Khmer capital Koh Ker, leading to restitutions from museums the Norton Simon Collection in Pasadena, California as well as The Met.

Andy Sinclair, a Denver Art Museum spokesman, tells The Art Newspaper that the museum had “deaccessioned” the Latchford items in September.

Since Latchford’s indictment in New York for art trafficking in 2019, “the museum has been in conversation with both the US and Cambodian governments regarding these objects and their return,” Sinclair says.

The Denver museum originally acquired from Latchford two artefacts: a 130cm-high statue of Prajnaparamita, the goddess of transcendent wisdom, from Angkor, and a statue of a Sun God recorded as being from the pre-Angkor period. They also purchased a lintel engraving depicting the sleep of Vishnu and an ancient bronze bell. The museum says it is also “conducting research on two objects from Thailand” that came from Latchford: an 18th- to 19th-century cabinet and ancient vessel.

The museum had a special connection with Latchford through his friend Emma Bunker, with whom he co-published catalogues on Khmer art. Bunker, who died in February, was a consultant and a lecturer for the Denver museum and a member of its board. In 2011, she was commissioned as an expert dealer by Sotheby’s when it tried to sell a sculpture of the Hindu warrior Duryodhana. The relic had to be returned in 2013 when Cambodia pre- sented evidence of the looting.

For decades, scholars have suspected that dozens of pieces appearing under the title Skanda Trust were in fact his property. A source directly involved in the matter confirmed Latchford’s ties with an offshore company named Skanda—but denied it was a reaction to the US investigation. “Skanda wasin fact set up in 2009, for fiscal reasons related to inheritance, before all of this happened,” says the source. Later, the collection was placed under the control of a new trust named Siva, while the financial assets were managed by the Jersey-based Skanda Trust.

Douglas Latchford’s daughter, Julia, decided to return her father’s entire Khmer collection to Cambodia after his death. However, she told The Art Newspaper that she did not act under threat of losing financial assets from the US. “She was never charged with anything, and she was never accused of trafficking items or money,” says a source close to the family.

“She gradually understood that her father might have misled her. The more she learned, the less confident she was she could separate legitimately acquired items. Ultimately, she had the feeling the whole lot belonged to Cambodia.”

The same source insists Latchford’s daughter is “fully cooperating with the Cambodian authorities, providing information and documents not only on her father’s dealings but on transactions on the Khmer art market”.

It is thought her co-operation could lead to new findings in American collections. Review | An important project somewhat marred by its execution: the Corning Museum’s VR recreation of a lost glass drawing room in a London palace | In Sparkling Company: Glass and the Costs of Social Life in Britain During the 1700s